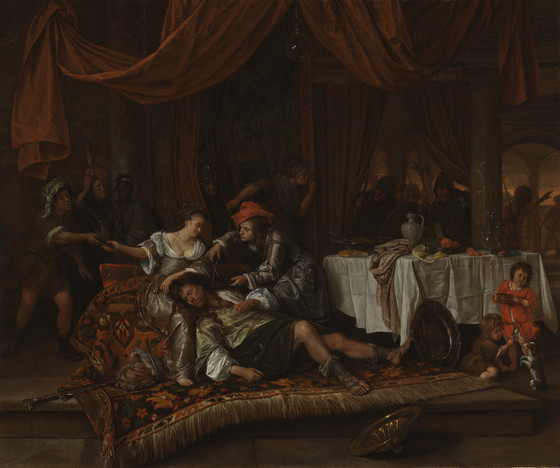 (1) LACMA’s painting has traditionally (going back to at least Smith 1829–42) been identified as the painting sold in Amsterdam 16 March 1724, lot 7, from the collection of George Bruyn, for fl. 380. The same painting appears in an undated inventory of the possessions of George Bruyn and Lavinia van Oosterwijck, Amsterdam, made between 25 January 1724 and the date of the sale. The entries for the painting both describe it as “Daar Simson van de Philistijnen gebonden is [Samson bound by the Philistines], door Jan Steen, heel goet en raar van gedagten.” The painting owned by Bruyn and his wife better fits the painting Samson Bound, of between 1667 and 1670 (fig. 12), which shows Samson with his arms bound behind him. The identification of LACMA’s painting with that formerly in the collection of Wynand Coole, Rotterdam (sale, Rotterdam, 6 August 1782, lot 65), is also probably incorrect. The catalogue for the sale of Coole’s collections describes the painting as “Samson, in de schoor van Delila, zeer natuurlyk en kragtig geschildert, hoog 34½ duim, breed 28 duim, Dk.” (Samson in the lap of Delila, very naturally and cleverly painted, height 34½ [in.], width 28 [in.], canvas).

(6) Sedelmeyer 1898, p. 216, notes, “From the collection of N. Osthuyzen, The Hague,” a suggestion that he acquired the painting directly from Osthuyzen. In the preface to Sedelmeyer 1898, the author states that this catalogue includes “a selection from those pictures by Old Masters, which I had owned and sold prior to 1894.”

(7) According to Yeide 2009, p. 420, no. A1549, n. 2, the painting was on the Limberger list dated 8 July 1943 in NARA/RG260/Box 437/Folder VI. The painting later appears as no. 448 on the Veldenstein Transport list of Göring’s paintings removed from the bunkers at Kurfürst and Carinhall to the Castle Veldenstein in early 1945. Later in 1945 the painting was secured by the 101st Airborne Division at Unterstein, Berchtesgaden Army (Berchtesgaden Inventory, p. 23) in preparation for transfer to the Monuments, Fine Arts and Archives Section, Third United States and the Munich Central Collecting Point (MCCP Property Card no. 6750). The painting is also mentioned on p. 74 of the Consolidated Investigation Report (CIR 2) by the Art Looting Investigation Unit (ALIU) of the Office of Strategic Services (OSS) concerning Göring’s collection. It also appears as B323/318, in the Bundesarchiv Koblez (BAK), which contains research conducted by the Treuhandverwaltung von Kulturgut (TVK) on the Göring collection. See Yeide 2009, pp. 22–24, for an explanation of the documents.

(8) SNK 993: “In 1943 op ziecht [?] naar Duitseland gezonden in handen van den Heer A. W. Hofer, en bested voor Göring, maar niet aangekocht.” According to the OSS Interrogation Report, p. 74, Jan Steen’s painting Samson and Delilah was taken from Bachstitz by Göring as surety for the dealer’s good behavior after Göring gave him a visa to Switzerland at Hofer’s request. Because the painting is not listed in any of the Göring inventories, it must never have actually been personally acquired by Göring but kept separately, explaining the confusion.