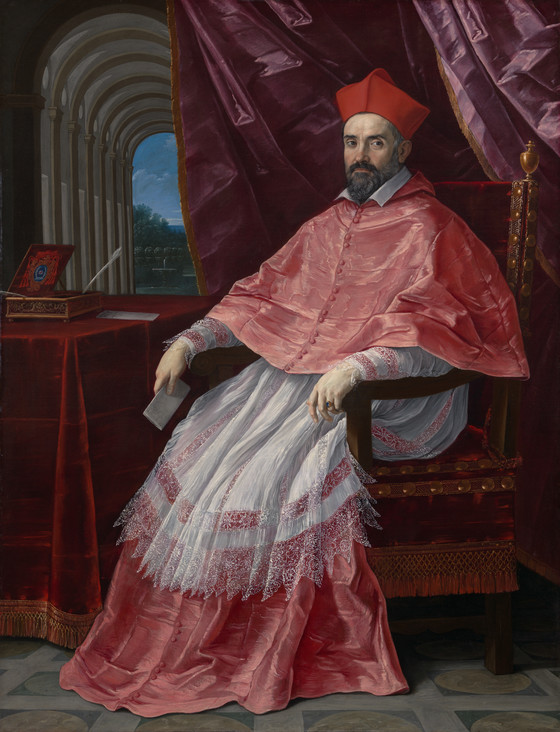 (1) According to Jennifer Montagu, "there are two Ubaldini inventories, the second of which is apparently a continuation of the first, made for his residuary legatee, the Propaganda Fide. Both are in the Archivio di Stato, Rome, Notaro della Tribunale dell’Auditor Camerae, Belgius. The first begins on 26 April 1636 and is in vol. 696, fols. 751–806; the second begins on 4 May and is in vol. 697, fols. 103–15v, 156–65r" (letter dated 22 April 1987, Reni object file, Department of European Painting and Sculpture, LACMA). Vol. 696, fol. 757v (Nella stanzino che responde sopra alla strada del Borgo S[anto] Sp[irt]o): "Un altro quadro grande di d[ett]o Card[inal]e a sedere di Guido Reno con cornice di legno rauescate d’oro." Two other unattributed portraits of the cardinal are also mentioned.

(2) Mario was the son of her brother Fabio Accoramboni.

(3) Included in the 1694 list published in De Marchi 1987, p. 64. The introduction to the inventory of Ugo’s estate in 1719 notes that Ugo Accoramboni Octavian, the son of Mario, came into the possession of the collection following the death of the father of the entail established by his greataunt Maria Isabella, wife and heir of Octavian Ubaldini. Ugo was appointed conservator of Rome in the years 1686, 1695, and 1704. On 8 November 1707 he married Frances, daughter of the marquis Giovanni Battista of the Dragon. They gave birth to Ugo, Mario, Andrea, and Fabio. Inventory of assets (A.C., sec. Not. XII, 53, not. F. Floridus, 22 May 1719; entered into the Getty Provenance Index, Archival Inventory Database I-614).

(6) "Un quadro rapresentate il ritratto del Cardinale Ubaldini che si crede di Guido." The inventory, which was one of the inventories of Roman private collections ordered by the pope on 2 October 1802, includes a number of portraits of Duca Ubaldini, as well as an "altro rapresentant un Cardinale" (Rome 1995, pp. 77–78).

(8) As Pepper 1984, p. 151, noted, the sale catalogue entry incorrectly states: "From the Spada Palace, Rome. Bought in for Mr. Irving, through Mr. Yates, the picture dealer." Pepper identifies Irving as William Buchanan’s associate, who was a wellknown importer of pictures from Italy. No mention of the painting appears in Buchanan 1824.

(10) Robert Walton Goelet was a wealthy New York landlord and socialite, who inherited a fortune estimated to be $40 million when his mother died in 1915. His mansion, Ochre Court, built in 1892 for $4.5 million by his uncle Ogden Goelet, was the second largest mansion in Newport, Rhode Island, exceeded in size only by the Breakers.

(11) The sale catalogue notes: "This painting is a replica of a work by Guido Reni in the B. Guinness collection, England." The painting was reported to have been very dirty when it was brought up at the sale and doubted by Sotheby’s experts, as well as Stephen Pepper, all of whom later came to recognize it as a major work by Guido Reni himself. See "Reni Reattributed" 1983.