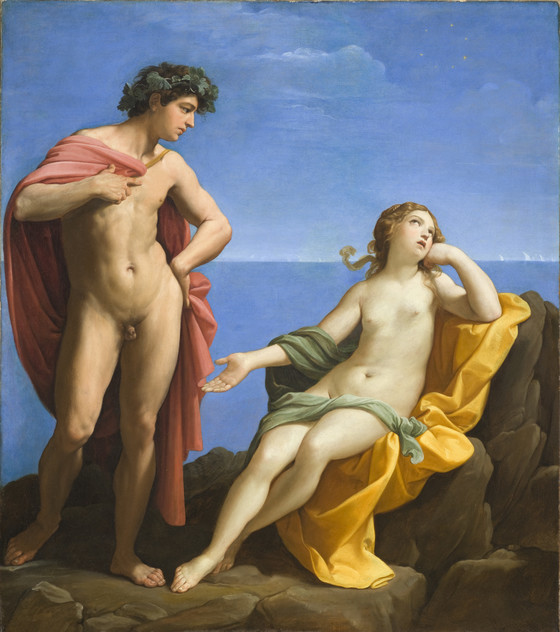 (1) As reported by Adolfo Venturi (1882, pp. 184, 195), a letter written from Bologna by Rinaldo Ariosti to his master, the duke of Modena, on 21 February 1677, reports that there is a Bacchus and Ariadne by Reni on the market which belonged to Rinaldi. Rudolph 1974, p. 40, was the first to propose that the painting’s owner was Cesare Rinaldi, a famous Bolognese poet, who was a friend and correspondent of Reni’s from at least 1613.

(3) Pepper 1984a, p. 238, referring to information from Leslie Harris, who was preparing a history of the Scarsdale collection, stated that Nathaniel Curzon purchased the painting, which was at Kedleston, his ancestral home, by 1769, when it appears in the printed catalogue of his pictures. Curzon was buying paintings in London in the 1770s, so Pepper suggested that he had acquired it from the London sale of Hogard & Co., 8 Mar. 1769, lot 49, "Guido, Bacchus and Ariadne, a capital picture." In the second, revised edition of his monograph on Guido Reni, published in Italian, Pepper (1988, p. 245) amended the provenance, apparently based on additional information from Harris, stating that Nathaniel Curzon had acquired the painting in November 1758 and that it was mentioned in the collection in The English Connoisseur in 1766. According to Harris, cited by Pepper 1983, p. 72 n. 23, "The first Lord Scarsdale entered in a bound book ‘the sizes of the pictures without their frames.’ On the inside of the front cover he has inscribed ‘Scarsdale 1761.’ Unfortunately, in virtually all cases he wrote only the artist’s name but no title." Reni’s Bacchus and Ariadne appears on p. 8, with the dimensions given as 2 ft. 9 in. wide by 3 ft. 2 in. high. In The English Connoisseur in 1766, a painting in the saloon is described as "Bacchus and Ariadne, two single figures by Guido," confirming its identification with the painting that remained with the Kedleston Estate until it was sold to Agnew’s in 1978. The painting also appears in two privately printed catalogues of the collection, where the painting, identified as "Guido Bacchus and Ariadne, 3 ft. 9 in. [width] × 2 ft. 21/2 in. [height]," appears in the "North Music Room, West End," having moved from the saloon. The discrepancy in the dimensions probably represents a mistranscription from the earlier handwritten catalogue. Catalogue of the Pictures, Statues, etc. at Kedleston. With some Account of the Architecture, published in 1769, is cited by Pepper 1983, p. 72 n. 23. Not mentioned by Pepper, Catalogue of the Pictures, Statues, etc. at Kedleston includes the same text without the additional information about the architecture, perhaps indicating it precedes the 1769 publication. It is unlikely, however, that it dates from 1758 as is suggested by an annotation to the copy at the Getty Research Institute, since it also locates the painting in the music room rather than the saloon.

(4) Confirmed in an email from Jane Hamilton, archivist and research assistant, Agnew’s, to the author dated 30 June 2000.