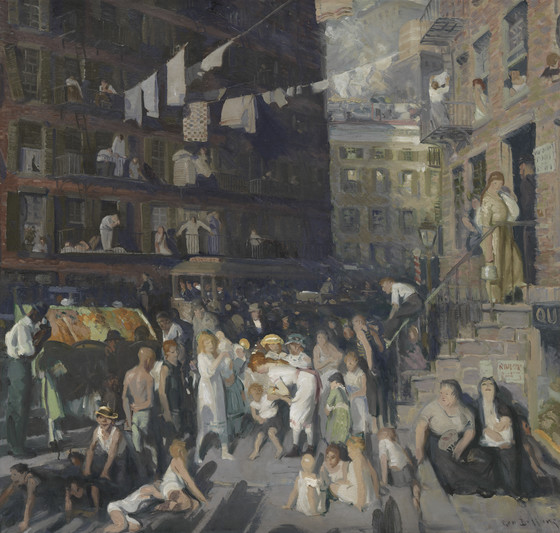 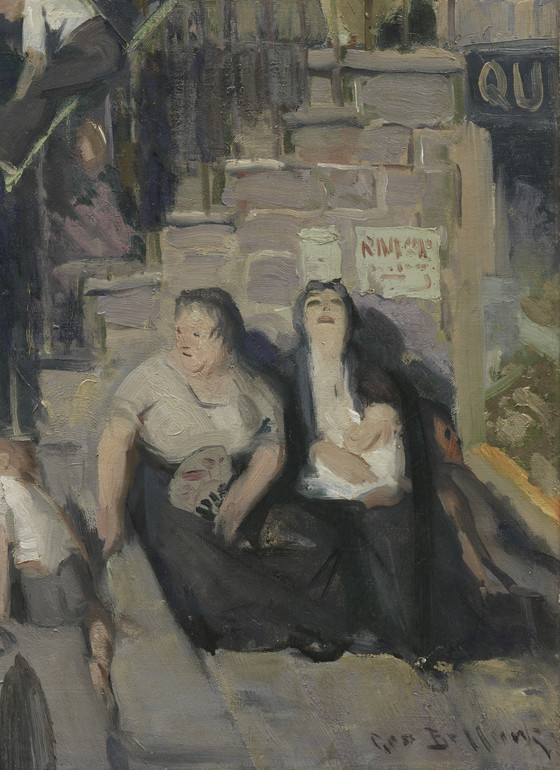 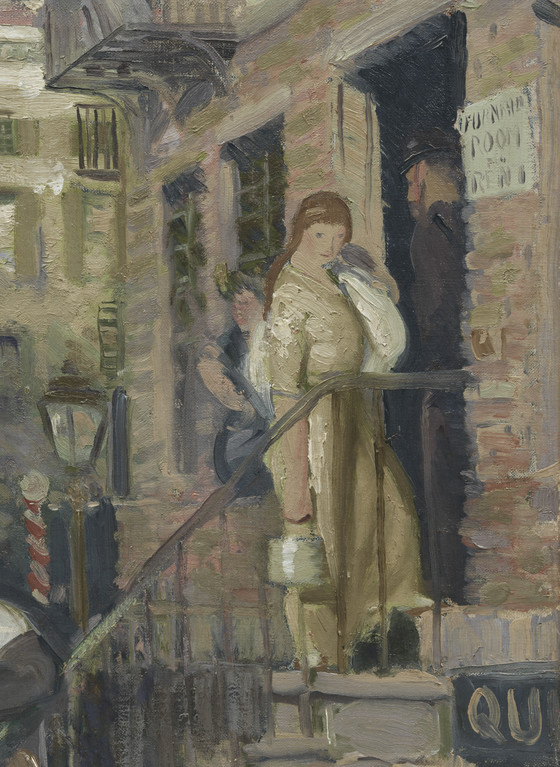 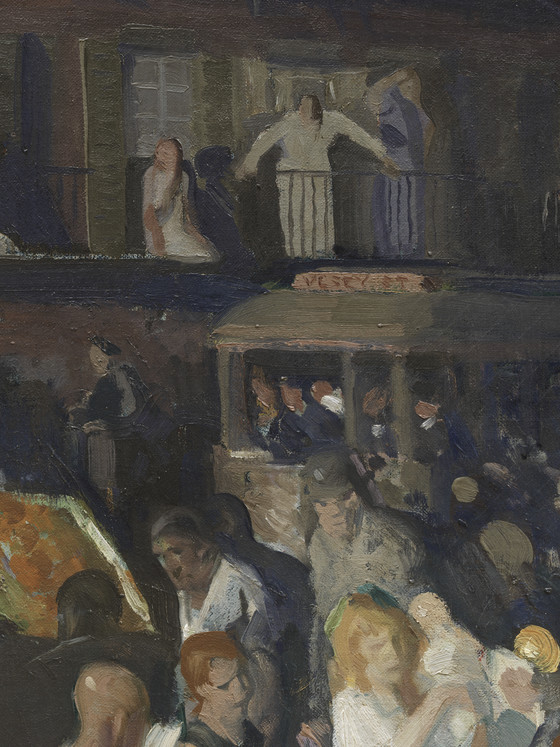 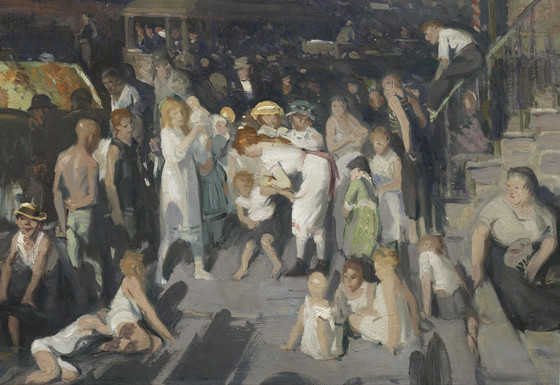 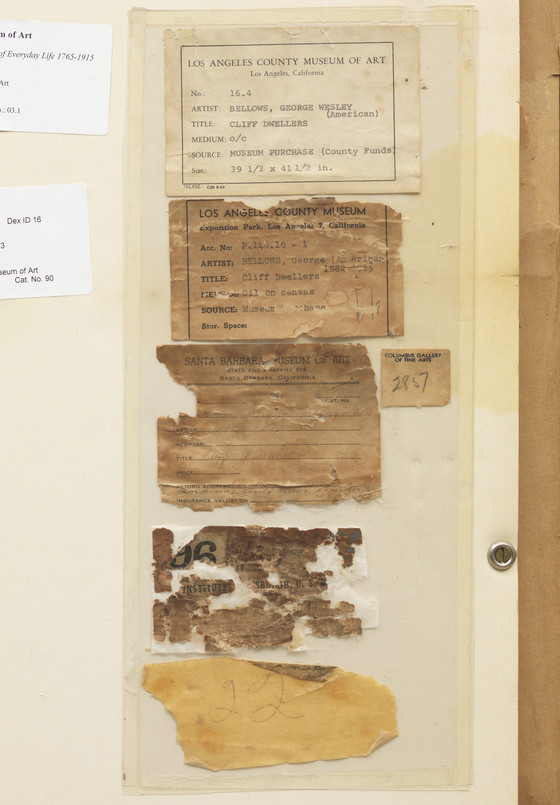 Among the first paintings acquired by the Los Angeles County Museum of Art, Cliff Dwellers is still its best known and most often reproduced American painting.

...
Among the first paintings acquired by the Los Angeles County Museum of Art, Cliff Dwellers is still its best known and most often reproduced American painting.

A large part of the work’s attraction to students of American history has been the fact that it appears to stand out among Ash Can school paintings as a statement of strong social criticism. This interpretation has been derived not so much from the appearance of the canvas as from the fact that it is very similar to the drawing Why Don’t They Go to the Country for a Vacation? (1913, LACMA), executed by Bellows for the socialist journal The Masses and published as the frontispiece of its issue of August 1913.

Almost all the Ash Can school artists who contributed to The Masses stopped short of creating outright political statements. For the most part, they simply considered themselves to be realist artists, producing vignettes of urban life that fit with the journal’s alert, down-to-earth editorial tone. Their consciously artistic, realist drawings of indulgent social satire are distinctly different from the bald editorial cartooning that also appeared in The Masses. Their paintings were yet further removed from the editorial tone of the magazine. John Sloan, for instance, who occasionally contributed scathing editorial cartoons to The Masses, did not express any sense of social criticism in his paintings, which portray the energy and simple pleasures of the poor.

One cannot find in Cliff Dwellers any trace of a change in tone from Bellows’s other urban scenes, whose subject and spirit center on the excitement and bustling activity of the city and the surging vitality of its lower classes. The spirit of the scene is established by the innocent joie de vivre of the brightly lighted foreground group of young women and children, especially the bawling, grinning, brawling boys so familiar in Bellows’s works. Another prominent note is the mother ascending the stairs on the far right, so reminiscent of the hard-working homemakers of Daumier and Chardin. On the far left, the bright colors of a market cart attract the eye. Except for the large building in deep shadow, the effect is that of sunshine, with a stiff breeze lifting some of the laundry. The irregular angles of the streets and the streetcar’s "Vesey Street" destination sign suggest that this is a location in the Lower East Side of Manhattan between the Bowery and Catherine Slip below Chatam Square.

Bellows’s record book indicates that the painting was completed in May 1913. He wrote the title originally as Cliff Dwellers but then crossed out the definite article. As noted in his record book during April 1913, Bellows completed three drawings for The Masses, including the museum’s drawing reproduced in the August 1913 issue. Its title was recorded as Why Don’t They Go to the Country for a Vacation? but is also identified, in parentheses, as "(study for) Cliff Dwellers." The fact that the drawing reproduced in The Masses was completed at a time when Bellows very well may have been working on Cliff Dwellers raises the question of whether that drawing may originally have been made in preparation for the painting and then given a second life as a frontispiece in the magazine. On the other hand, the drawing is a transfer lithograph reworked with pen and ink, an uncharacteristic working method for Bellows, but one that he used for other Masses illustrations, which suggests that the drawing was done especially for the magazine.

The record book reveals that Cliff Dwellers was organized according to a disciplined color scheme, primarily based on the ideas of the color theorist and paint supplier Hardesty G. Maratta (1864-1924), which were of much interest to Bellows, Robert Henri, and others in the 1910s. The painting’s palette is indicated as: Three c[h]ords.

"Chords" were a concept of Maratta’s, triads of usually complementary colors that were chosen, like notes of the musical scale, to establish a particular harmony and mood for a painting. These chords of colors appear to work in different sections of Cliff Dwellers. In the produce wagon the first chord of orange, red-purple, and green-blue can be found, and these colors recur throughout the lower section of the painting in the crowd. Even the notes of yellow and blue there probably were created by mixing a good deal of white with the orange and the blue-green of the chord. The blue-purple of the second chord can be said to dominate the shadowed building at the left, with its green shutters and red brick wall. The wall, however, has too much blue in it to be called a red-orange. The yellow-green of the third chord is prominent in the lighted building at the right, although its patches of red and blue both tend toward purple. The chords are similar enough to blend easily into a unified painting with areas of relative emphasis on one chord or another. Bellows’s remarkable skill at mixing together different colors on the canvas, as he painted wet-into-wet, also enriched Cliff Dwellers with a multitude of intermediate hues that soften the discipline of what was to have been a limited palette while at the same time contributing to the quality of unity.

Along with Maratta’s system of colors, Henri, Bellows, and other students of Henri’s spent long hours studying and elaborating Maratta’s approach to composition, which sought a similar harmony and balance, using a structure of simple geometrical forms. Bellows’s fascination with geometrical compositions after about 1917 is well known, but technical aspects of Cliff Dwellers suggest that his efforts in that direction had begun by at least 1913. Bellows appears to have inserted at least ninety pins into the canvas at regular intervals, making horizontal, vertical, and diagonal rows. He apparently painted around them and then pulled them out while the paint was still soft, leaving very small craters, some of which he painted over. In a few areas, where the paint is thinner, portions of diagonal lines in red paint can be seen. These coincide with diagonal rows of pinholes and may have been used either at an earlier stage of the painting or to establish the rows. The intervals between the rows were established so that the pinholes form equilateral triangles, the key concept of the Maratta system. Some of these relate closely to elements of the composition. For instance, the figure of a woman with a fan in the lower right corner has a pinhole at the top of her head and at the point of each elbow. Other features, such as the strong edge of the silhouetted building to the right of center, are aligned with rows of pinholes. Of course, numerous geometrical forms can be constructed from a web of pinholes like this one. Further study of geometry in Bellows’s earlier paintings will be necessary to establish which regular forms he used and how they contributed to his compositional objectives. Another question is posed by the numerous, apparently random pinholes in the museum’s related drawing. Were they somehow used to transfer elements of the design, while aligning them with the structure of the painting?

The painting was well received, winning five hundred dollars and the third-prize medal in the annual exhibition of 1914 at the Carnegie Institute of Art, Pittsburgh. It toured the country and was shown in Los Angeles several times, in group and solo Bellows exhibitions, before its purchase by the museum on September 16, 1916. Although it was not included in the catalogue of the museum’s exhibition of contemporary American paintings in the summer of 1916, the American Art News states that it was bought out of that exhibition.
END_OF_DOCUMENT_TOKEN_TO_BE_REPLACED

The early twentieth century witnessed the transformation of the United States into a modern industrialized society and an international political power.

The early twentieth century witnessed the transformation of the United States into a modern industrialized society and an international political power. By 1920 more than half of the country’s population lived in urban areas. Seeming to guarantee employment, the cities lured many farmers and African Americans from rural areas. In addition, between 1900 and 1920, 14.5 million immigrants from Europe, Russia, Mexico, and Asia settled here, primarily in urban centers. A new energy was channeled to such cities as New York and Chicago, as massive skyscrapers were erected to furnish much-needed office space and living quarters. Even West Coast cities were affected—the population of Los Angeles tripled between 1900 and 1910; its unplanned urban sprawl and dizzying speed were captured in the zany movies of the Keystone Cops, filmed on the streets of the city.

Art reflected these changing social and economic dynamics. Impressionism and Post-Impressionism were still popular. Yet other, more progressive ideas now challenged artists. A strong new commitment to realism emerged in literature and the fine arts.

In Philadelphia and New York, a group of artists centered around Robert Henri captured the vitality of urban American life. These realists depicted the hustle and bustle of city streets, the common pleasures of restaurants and various forms of entertainment. Critics dubbed these realists the “Ash Can School” because of their treatment of unidealized subject matter previously considered unattractive. These artists focused on the inhabitants of cities rather than the cities themselves. Their interest in people also led them to create a significant number of single-figure paintings, conveying the human side of the new America . During the 1910s and 1920s the realist celebration of America spread throughout the country, as artists recorded the neighborhoods and people that made their own cities distinct.

END_OF_DOCUMENT_TOKEN_TO_BE_REPLACED

Cliff Dwellers summarizes the aesthetics of the ashcan school, promoted by Robert Henri, Bellows’ teacher at the New York School of Art. Already in 1906 a newspaper critic realized that Henri’s students were painting “Manhattan everyday life…not idealized and worked up into unnatural ‘effect’ but truthfully and powerfully and without flattery.” Bellows chose a rough edged brush and a gritty palette to render the harsh actualities of people’s lives.
END_OF_DOCUMENT_TOKEN_TO_BE_REPLACED