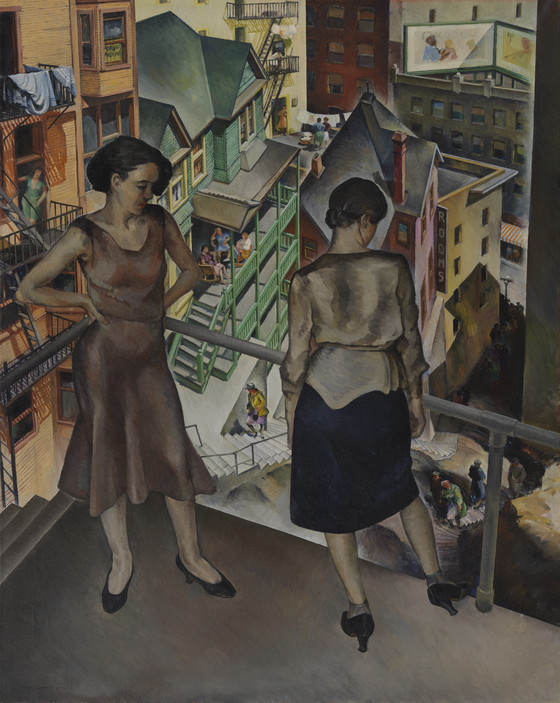 © Millard Sheets Estate
Enlarge My gallery Comment Tag Order Photography*
Please log in to add this item to your gallery.
View comments
Add a comment
Please log in to add comments.
Current tags
urban, LA-art
Please log in to add tags.
* Nearly 20,000 images of artworks the museum believes to be in the public domain are available to download on this site. Other images may be protected by copyright and other intellectual property rights. By using any of these images you agree to LACMA's Terms of Use.

In Tenement Flats and Spring Street, Los Angeles, (1930, estate of the artist), Sheets presented the traditional view of city structures from ground level, possibly prompted by the example of the well-known Cliff Dwellers by George Bellows, (1913, LACMA; q.v.), which had been on view in the Los Angeles Museum since 1916. As noted by contemporary critics, however, Sheets proved more inventive with Angel’s Flight: he viewed a poor section of Los Angeles from high on a hill. This unusual vantage point must have seemed logical though, given the unusually steep terrain of the area depicted, which is now known as Bunker Hill. A friend of Sheets’s who also painted the Los Angeles scene, Paul Sample (born 1896), was fascinated with unusual viewpoints.

The title of the painting, Angel’s Flight (with the variants Angels Flight and Angels’ Flight), refers to the now dismantled electric cable railway that was built in 1901 to carry pedestrians on Third Street up the steep hill from Hill Street to Olive, on the top of Bunker Hill. The funicular was built south of a road tunnel. At the same time a pedestrian stairway of 123 steps and ten ramps was constructed on the north side to give those who could not afford the railway free access to the top of Bunker Hill. On the crest of the hill a tall observation tower, known as Angel’s View, was constructed. The young women in the painting -- the model for both of whom was the artist’s wife, Mary -- may be standing on either the observation tower or a railway platform on the hilltop. Sheets omitted the famous cable railway and chose to view the scene looking north toward the stairway. He did not depict the stairs as straight, as they actually were, but showed them as meandering up the hill, thereby exaggerating the sense of height.

Each of the buildings has a slightly different perspective vanishing point. Furthermore, the two women placed in the foreground shadow serve as repoussoir elements, introducing the viewer to the scene below, and as a contrast to the brilliantly sunlit hill below, which further exaggerates the perspective. The prominence of the figures in the foreground and the effect of the unusual viewpoint are quite baroque, a quality seen in the paintings of Thomas Hart Benson and other regionalist artists.

Sheets’s palette is bright and varied, with the apartment buildings and boarding houses painted in vivid orange, red, yellow, and green. The color, combined with the perspective and contrasting light and dark areas, gives the painting a distinctively dynamic quality. Despite its Social Realist subject, Angel’s Flight was a precursor to Sheets’s brighter, more decorative postwar compositions. Sheets painted Angel’s Flight expressly for the 1931 Carnegie International Exhibition in Pittsburgh, the first major international show in which he was invited to participate. In 1932, the painting won a prize for the "most representative work" at the annual exhibition held at the Los Angeles Museum and was subsequently purchased for the museum. Angel’s Flight is generally considered to be Sheets’s masterpiece.
END_OF_DOCUMENT_TOKEN_TO_BE_REPLACED

The early twentieth century witnessed the transformation of the United States into a modern industrialized society and an international political power.

The early twentieth century witnessed the transformation of the United States into a modern industrialized society and an international political power. By 1920 more than half of the country’s population lived in urban areas. Seeming to guarantee employment, the cities lured many farmers and African Americans from rural areas. In addition, between 1900 and 1920, 14.5 million immigrants from Europe, Russia, Mexico, and Asia settled here, primarily in urban centers. A new energy was channeled to such cities as New York and Chicago, as massive skyscrapers were erected to furnish much-needed office space and living quarters. Even West Coast cities were affected—the population of Los Angeles tripled between 1900 and 1910; its unplanned urban sprawl and dizzying speed were captured in the zany movies of the Keystone Cops, filmed on the streets of the city.

Art reflected these changing social and economic dynamics. Impressionism and Post-Impressionism were still popular. Yet other, more progressive ideas now challenged artists. A strong new commitment to realism emerged in literature and the fine arts.

In Philadelphia and New York, a group of artists centered around Robert Henri captured the vitality of urban American life. These realists depicted the hustle and bustle of city streets, the common pleasures of restaurants and various forms of entertainment. Critics dubbed these realists the “Ash Can School” because of their treatment of unidealized subject matter previously considered unattractive. These artists focused on the inhabitants of cities rather than the cities themselves. Their interest in people also led them to create a significant number of single-figure paintings, conveying the human side of the new America . During the 1910s and 1920s the realist celebration of America spread throughout the country, as artists recorded the neighborhoods and people that made their own cities distinct.