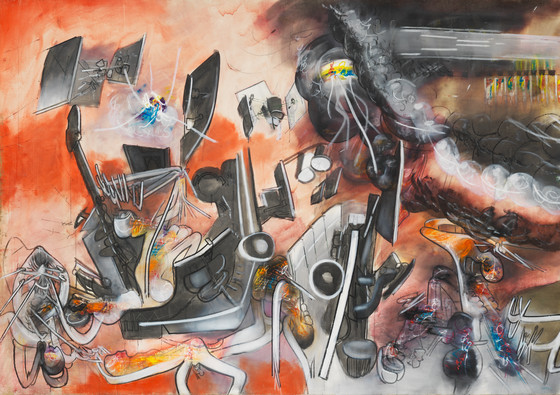 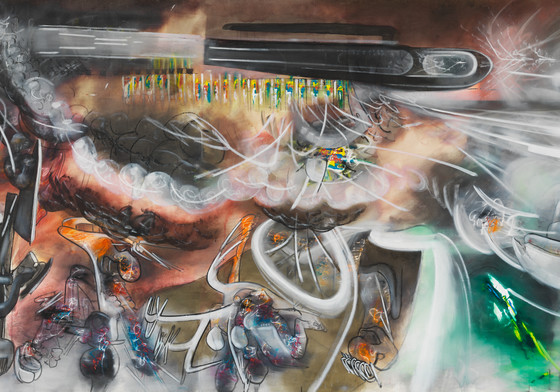 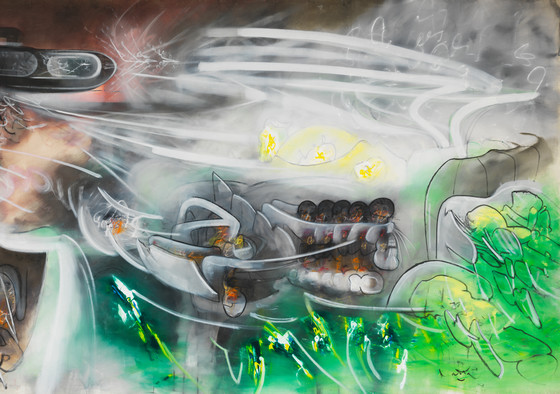 © Artists Rights Society (ARS), New York / ADAGP, Paris
Enlarge My gallery Comment Tag Order Photography*
Please log in to add this item to your gallery.
View comments
No comments have been posted yet.
Add a comment
Please log in to add comments.
Current tags
This item has not been tagged yet.
Please log in to add tags.
* Nearly 20,000 images of artworks the museum believes to be in the public domain are available to download on this site. Other images may be protected by copyright and other intellectual property rights. By using any of these images you agree to LACMA's Terms of Use.

Soon after Matta took up painting in the late 1930s, he developed his signature style of webs of lines and changing forms that give his compositions atmospheric depth. He coined the terms "psychological morphologies" and "inscapes" to describe these images. In the 1950s and 60's Matta's work took a new direction, as he became increasingly aware of the atrocities of war, racial discrimination, and man's destructive potential. Burn, Baby, Burn is among his most powerful works, reflecting this shift from his more introspective, Surrealist :morphologies" of the 1930s and '40s to his acute interest, as an artiste engagé, in the human condition.

Burn, Baby, Burn work was initially inspired by the horrific attacks of the Vietnam War. In 1965 the Watts riots erupted in Los Angeles when a California Highway Patrol motorcycle officer pulled over a black man on charges of drunk driving. Soon after, thousands of people began protesting the deepest discriminatory practices of the LAPD, reflecting the profound racial divisiveness of the city. Matta saw the Vietnam War and the Watts riots as connected. The cry "Burn, Baby! Burn!" was coined by the charismatic local radio giant Magnificent Montague, who would shout the phrase every time a piece of soul music got him excited. Listeners in Los Angeles appropriated the cry for the arson that marked the riots.

In Burn, Baby, Burn the viewer's eye moves incessantly from one point to another, echoing the bold dynamic and rhythmic sense of this quasi-galactic, futuristic composition. There is an electric, almost cinematic quality to the picture. Through a powerful turbo-like shorthand, Matta conveys a sense of speed and dislocation. Signs are scattered throughout the surface: imploding satellites to the left, suggesting the velocity with which news travel, a bolting vehicle at the top speeding across a freeway, and a group of black heads in a vertiginous vortex to the right. The phosphorescent, pungent green at the bottom right of the composition suggests hope, a verdant future. Like Picasso's Guernica (1937)-a work that Matta greatly admired and which he helped install in the Paris 1937 Universal Exposition-Burn, Baby, Burn is a bold indictment of the destructiveness of mankind and a manifesto for peace.

The painting remained in Matta's collection until his death in 2002-a sign of the significance Matta attached to it. The accession of this monumental, mural-sized canvas marks an important moment in the development of our collection, one that is directly related to the history of Los Angeles. View more works by Matta in LACMA's collection.

LACMA spoke with historian Chris Agee about the context of this artwork. To hear his commentary, press the play button below.

LACMA spoke with historian Chris Agee about the context of this artwork. To hear his commentary, press the play button below.