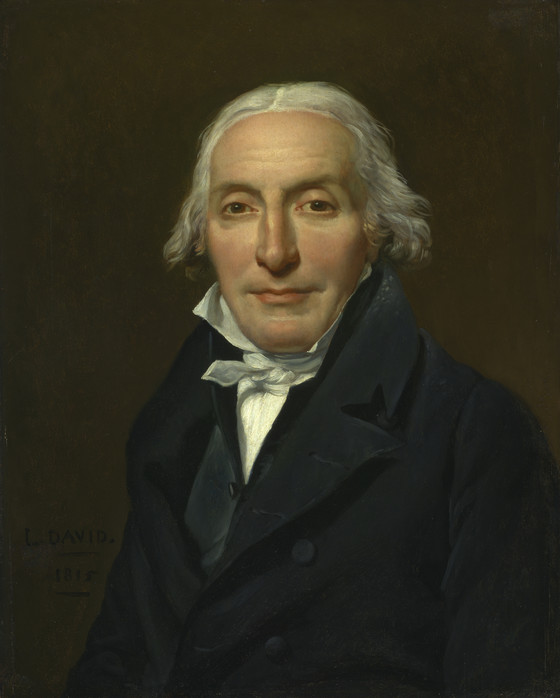 Similar to the way French playwright Pierre-Augustin Caron de Beaumarchais (1732-1799) used his plays featuring the fictional character of Figaro to champion lower-class morality, painter Jacques-Louis David employed classical allegories to illustrate the Republican virtues he saw emerging in France during the Revolution. David became famous for these politically charged history paintings, but he turned to portraiture after the Terror in 1794. This particular work is the last David painted before he fled to Brussels in 1815.

The subject of this painting, Jean-Pierre Delahaye, was a man of persistence: he continued his law practice during the years of the Revolution by repeatedly completing the regime’s frequently changing requirements. David focused on illuminating Delahaye’s trustworthy expression, honoring their close friendship. In the year of Delahaye’s death in 1819, an obituary revered him as “the most upright and distinguished member of the Bar,” validating David’s representation of his strong moral character.

The year 1815 marks a turning point in Jacques-Louis David's life and career. Born in Paris, but trained in Rome, David had been the most visible artist in France since the return to his country in 1780. The new style he promoted in compositions remarkable for their clarity and splendid craftsmanship was revolutionary in many ways: David offered an alternative to the late Rococo style of his erstwhile teacher, François Boucher, and his paintings conveyed a moral tone and implied message of support for new political ideals that resonated with a large segment of the public. David himself joined the ranks of the revolutionaries, served in the government and put his talent to the service of the new regime. At the end of the French Revolution, David supported the rise of Napoleon Bonaparte, eventually rallying to Napoleon and becoming his favorite and official artist.

On March 20, 1815 Napoleon, who had been held prisoner on the island of Elba, escaped and arrived in Paris after a sweeping march through France. The following period, known as the 100 days, saw a rapid - but short-lived, re-establishment of Napoleon's power. Napoleon did not remain oblivious to the fate of his favorite artist. Reinstated in his position as official painter only five days after Napoleon's arrival in Paris, David signed an oath of fidelity to Napoleon, which sealed his political fate when Napoleon's defeat at Waterloo on June 15, 1815, triggered the former Emperor's abdication. Fearing the consequences of his unconditional dedication to Napoleon, David hastily decamped for Switzerland. Back in Paris in September 1815, the political situation grew uncomfortable for him. In January 1816, Louis XVIII back in power for the second time promulgated an edict condemning the exile of those who, like David, had pledged allegiance to Napoleon. At the end of January 1816, David left for Brussels, where he died in 1825.

It was against this political background that David found time to execute the portrait of Jean-Pierre Delahaye, dated and signed 1815 - the last portrait David executed in France. Delahaye was a lawyer who had helped David with the management of his affairs since 1812. At the time of his exile, David appointed him as his proxy in Paris. Delahaye, for instance, handled the sale of David's early masterpieces, The Sabine Women and Leonidas at the Thermopylae, to Louis XVIII, who wished to acquire them for the Louvre but refused to deal directly with the painter. The exact circumstances of the portrait are unknown. One can imagine that the ties that linked the two men were sufficient to prompt David to execute his friend's portrait, perhaps as payment for services rendered. The portrait, never previously exhibited, remained in the Delahaye family.

The portrait itself is remarkable in representing a personable subject with a great dignity worthy of Roman Republican portraits, the kind David would have studied and admired while a student in Rome. The subject is painted with great economy; the sitter's dark jacket and grey-blue vest set off his elaborate white cravat and enhance the subject's engaging expression.

This remarkable portrait, a major rediscovery and addition to the artist's oeuvre completes an important group of paintings of the Revolutionary and Empire periods, already in the museum's collection.