Plague in an Ancient City 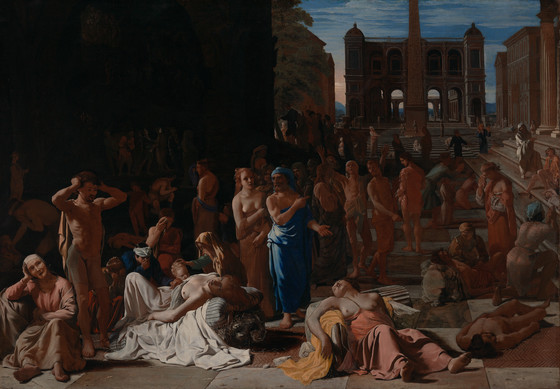 Plague in an Ancient City

(1) According to Young 1822 (the catalogue of pictures at Leigh Court), Horton Langston’s father brought the painting back from Cadiz. John Langston, Esq. of Sarsden House, Oxfordshire, was a member of Parliament from Oxford. He was married to the second daughter of Harriet, the only sister of Henry Hope, and John Goddard, Esq. of Woodford Hall, Bedfordshire. Their son was Horton Langston.

(2) According to Young 1822, “Its [the painting’s] merits appear to have been imperfectly appreciated by Mr. Langston, who assigned it a place on the staircase of his house, in Queen Square; where for a very long period, from the darkness of the situation, it escaped observation. From this gloomy abode, it was rescued by the penetrating eye of Mr. Hope in whose Collection justice was done to its merits.”

(3) The sale was listed as the collection of Henry Hope, Esq., deceased. See notes to the sale published by Getty Provenance Index, Sale Catalogues Database.

(5) Philip Miles was a banker in Bristol and began his collection about 1816.

(7) Danziger 2004, p. 450, mistakenly suggests that Sir Francis Cook acquired the painting about 1884, thus directly from the sale of Miles’s collection or shortly thereafter. On p. 449, Danziger notes, “In his will, Francis had divided the collection between his two sons: ‘the pictures and drawings, the antique sculptures and marbles, the tapestries, glass and terra cotta . . . to Sir Frederick Cook . . . whilst the bronzes, silver, ivories, china miniatures, missals, antique gems and mediaeval jewelry were left to his second son, Mr. Wyndham Cook [1860–1905].’”