Christ on the Cross with Saints Vincent Ferrer, John the Baptist, Mark and Antoninus 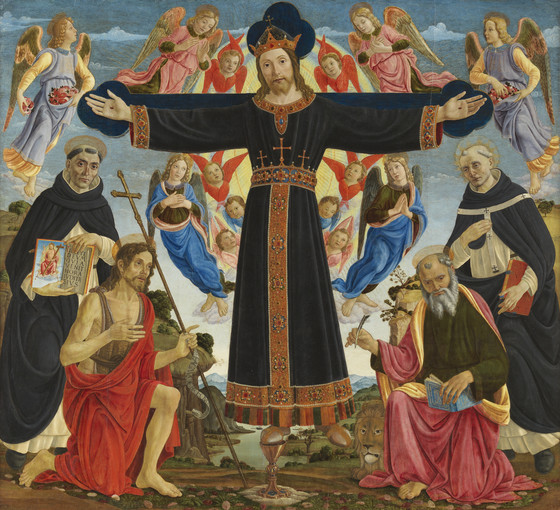 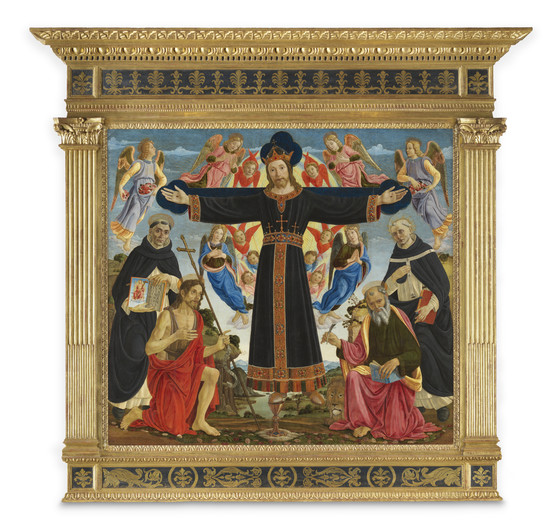 Christ on the Cross with Saints Vincent Ferrer, John the Baptist, Mark and Antoninus

At first glance, the painting appears to be a crucifixion scene, but it’s not. Press the play button below to hear more as you take a closer look.

(2) Edward Solly was an English timber merchant living in Germany. In 1821 the Prussian State purchased three thousand paintings from his collection, which became the nucleus of what is now the Gemäldegalerie in Berlin. Solly made his fortune in timber but later, in London, was a dealer in paintings, saving, however, the best, including the Volto Santo for himself. For Solly, see Herrmann 1967–68.

(3) According to an annotated sale catalogue quoted by the Getty Provenance Index, Sales Catalogues Database. One catalogue notes "Smith of Bond St."

(4) Lieut. Benjamin Seymour Guinness RN was trained as a lawyer and made a fortune as director of the New York Trust Co., Lackawanna Steel Co., Kansas City Southern Railway, Seaboard Air Line, Duquesnie Light Co., and United Railroads of San Francisco. He was the younger brother of Arthur Guinness, the Guinness brewery’s founder.

(5) Guinness took the painting to his home in Mignano about 1936, when he married Marchesa Maria Nunziante di Mignano, the daughter of Mariano Nunziante, duke of Mignano. The altarpiece was stored in Leghorn during World War II and thus avoided destruction with the house in Mignano in 1943. About 1950, following Benjamin Guinness’s death in 1947, the painting was taken to a Guinness home in Switzerland, where it was kept in storage until it was discovered in 1991, following the death of Thomas Loel Evelyn Bulkeley Guinness and the assessment of his estate.

(6) Thomas L. E. B. Guiness, Benjamin’s son and heir from his first marriage (1902) to Bridget Williams Bulkeley, was a member of Parliament for Bath (1931–45), a businessman, and a philanthropist.