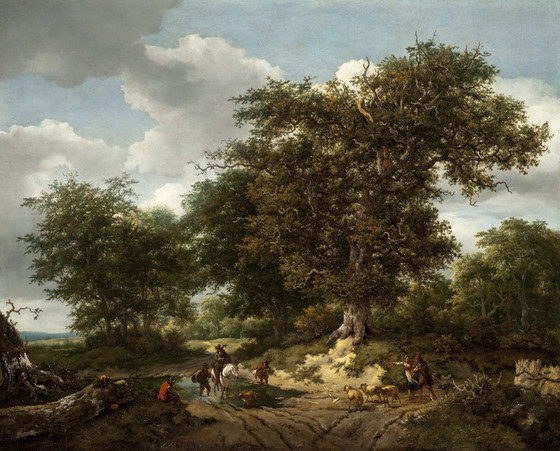 (1) The posthumous manuscript inventory of Gonzaga’s painting collection includes 832 works, of which approximately 300 were sent to Amsterdam, where they were sold at two auctions. Slive 1987, p. 172n10. According to Slive 2001a, p. 293n1, the inventory, datable to 1756–63, lists the painting as no. 154: “Quadro di palmi 4, once 9 per larghezza, e palmi 3, once 3 per altezza, rappresentante un paese, con figure, in tavola, di Berclem [sic].” The catalogue, “Catalogo dei quadri tuttavia essistenti nella galleria della Ch. Mem. Dell’ Emo Sig. Cardinale Silvio Valenti,” is in the Biblioteca Communale, Mantua, Misc. 109.I;  a typescript of the catalogue is at the Wadsworth Atheneum and Museum of Art, Hartford, CT. The complete inventory is published in Pietrangeli 1961, pp. 43–71.

(2) The sale catalogue is reproduced in Terwesten 1770 (1976), pp. 289–309. The sale price and name of the buyer appear in an annotated copy of the sale catalogue at the RKD–Nederlands Instituut voor Kunstgeschiedinis, The Hague.

(3) Fouquet was one of the major buyers at the sale. Los Angeles 1992–93, p. 132, identifies the painting as lot 67 in Fouquet’s sale through Langford, London, 10–11 Feb. 1773, where it is described as “Berchem, 67 A Landscape and cattle; a summer scene, touched with spirit, well composed, and very clear.” The dimensions are noted as 2 ft. 8 in. by 3 ft. 4 in. (32 × 40 in.), almost two inches smaller in height and width than The Great Oak, which measures 33 7/8 by 41 7/8 in. Although the current stretcher is about 1/4 inch larger than the painting on each side, there is scalloping on the sides and the tacking edges have been removed, indicating that the painting was probably originally the current size (see Technical Report). The Great Oak also does not include cattle, suggesting that lot 67 refers to another painting. Although the 1773 sale refers to Fouquet as “that celebrated collector de Heer Fouquet,” he was actually a major dealer.

(4)  According to the introduction to the catalogue, Pierre Grand-Pré was one of the wealthiest merchants of paintings in Paris, especially of Netherlandish paintings. Peronnet and Fredericksen 1998, vol. 1, p. 55.

(5) Pierre-Joseph Lafontaine was a painter active in Cortrai and Paris. Following the French Revolution, he became an art dealer, buying at auction throughout Europe for French museums.

(6) Arthur Sanderson was a wine merchant and whisky distiller, who built Learmonth Terrace House in Edinburgh in 1891 to house his collection of old master paintings, antiques, porcelain, and sculpture. Financial difficulties led him to sell his collection in a series of sales between 1908 and 1913. Edinburgh 1992, p. 170.

(7) The Fleischmann sons changed the family name from Fleischmann to Ashcroft during World War I.

(8)   I am grateful to James Mitchell of John Mitchell Fine Paintings, London, for clarifying the provenance. According to him, the painting was sold through Harari & Johns by the Ashcroft heirs on whose behalf his father, Peter Mitchell, was working. James Mitchell’s grandfather, John Mitchell, knew the Ashcroft sisters well and sold a number of paintings for them in the 1960s. The firm continues to be involved in the dispersal of the collection.